Our hotel boats are moored at a location known as De Ceuvel: once a small shipyard,
now a circular ‘hatchery’ or ‘clean tech playground’. A 10-year lease of the land was secured from the municipality of Amsterdam after a group of initiators won a tender to turn the site into a regenerative urban oasis. This former industrial plot was converted into one of the most unique and sustainable urban developments in Europe. Surrounded by an undulating landscape of soil-cleaning plants, these on-land houseboats include offices, studios and work-shops for creative and social enterprises, as well as a sustainable bar/restaurant.

Being a member of the De Ceuvel family, Asile Flottant will contribute one euro per
guest per night to the maintenance of the grounds.

Vison and Mission of De Ceuvel
‘De Ceuvel is a cultural urban hub on the cutting edge of technology, sustainability
and art. We want to be the vanguard and a symbol of the social transition to a
contemporary circular lifestyle. With our cultural program we try to inspire and
involve like-minded individuals into a growing movement of innovation and transition
to a more sustainable city, country and world…’
(quote from De Ceuvel website)

The history of De Ceuvel
1919: Mr. Nanninga, Mr. Meyer and Mr. de Groot bought the site to start a shipyard
1919: Construction of shipyard the ‘Volharding’ (translates as Perseverance)
1920: Finalization of the shipyard including 25 to 30-meter ramps. The shipyard is especially successful during winter. A close by incinerator discharges its cooling water in the entrance canal of the shipyard preventing the water from freezing
1940 – 1945: During WWII the adjacent Fokker Airplane company was bombed also causing damages to the shipyard. Fortunately, the damages could easily be restored
1953: Mr. Pietersen bought the shipyard and invested in a new engine room and new jetty’s. Also, he built a house for him and his family. He planted two trees that still stand today
1972: Another famous Amsterdam shipyard, the ‘Kromhoutwerf’ was bought from the widow of Jeltje Ceuvel. The shipyard expanded to receive larger vessels and changed its name in ‘Ceuvel-Volharding’
1984: Shipyard ‘Minerva’ was bought. Again the ‘Ceuvel-Volharding’ enlarged its capacity to serve even larger ships
2000: Despite its name (Ceuvel-Perseverance) the shipyard could no longer compete with the big multinational players. On top of that the Municipality decided to build a bridge closing down the entry waters for large boats. After eighty years of being in business shipyard ‘Ceuvel-Volharding’ closed its doors
2002: The Municipality takes down all buildings. Three 50-year old trees remain standing
2012: A group of local architects brings home a tender presenting the current concept of ‘De Ceuvel’
2013: First construction works of sustainable office park and café De Ceuvel
2014: Official opening of the offices and café
2017: First hotel guests check in at Asile Flottant

Drink in the honor of Mr. Pietersen
Mr. Pietersen, the owner of the shipyard from 1953, is still alive today and occasionally drops by to have a beer while sharing nautical memories. Café De Ceuvel well understood the touching and historical value of his visits and honored Mr. Pietersen by brewing him his own personal beer. In cooperation with a well-known Dutch beer maker, Gulpener, a smooth amber colored Belgian style Pale Ale has been created. Obviously, it’s named Mr. Pietersen Ceuvel Bier and it’s proudly available on draught at café De Ceuvel. We strongly advise you to have a few. Even if it’s not exactly your type of beer, definitely it’s a great story. 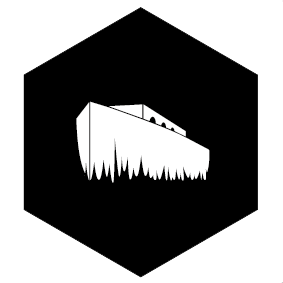 COVID-19 update: Hotel Asile Flottant is open and a safe haven! book your own private boat, your private entrance and your private outside space! Read more here
Loading Comments...